Gardening on the Homestead
Haines, Alaska

Since we live a largely subsistence lifestyle, gardening is an essential activity. We are challenged by limited sunlight, thin topsoil, encroaching tree roots, and herbivorous pests from voles to moose. Led by Michelle, we overcome all of these to produce a lot of good food each year from our main garden, greenhouse, and cold frames.

In addition to the cherries, strawberries, and rhubarb that were already here, we grow cool weather crops such as spinach, kale, cabbage, and fava beans. We also grow carrots, beets, onions, and potatoes, from baking potatoes to naturalized varieties grown by the region's Natives, such as Maria's (Tlingit) and Kasaans (Haida). In the greenhouse we grow peppers, tomatoes, and squashes, including pumpkins.

The former owners' rhubarb patch has continued to grow and thrive. "Pie plant"—it's not just for breakfast anymore!

Autumn 2008 we built a cold frame next to the rhubarb patch to extend our greens into the winter, and to put a handy source of leafy vegetables closer to the house.

The main garden and adjoining greenhouse provide the bulk of our vegetables. 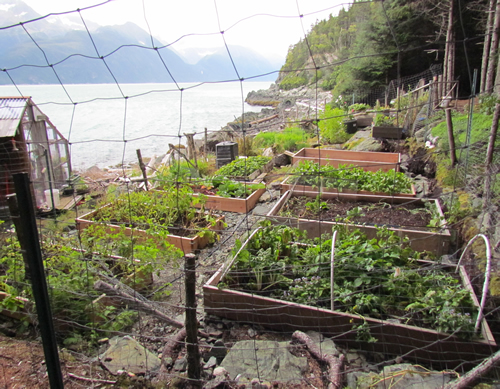 We found a substantial garden area and a lovely greenhouse that had not been used for a few seasons and had overgrown with weeds.

Our first task was to dig out the tree roots that invaded every inch of the garden. We dug out amazing amounts of soil that the previous owners had carefully created, right down to the large rocks that form the base of our beachfront garden. We then lay down landscape cloth and sifted the soil back into the hole, taking out roots, weeds, rocks and various buried plastic toys as we went. It took two springs to reclaim the original beds.

Since then we have cut trees to let in more light, enlarged the fenced area and built raised beds. It's an ongoing project. 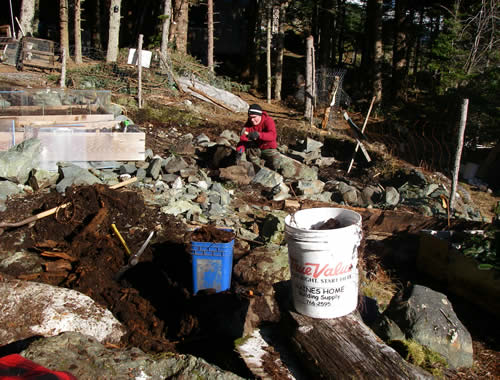 The garden rests on old rocky beach. It requires a lot of rock breaking and filling to level the grow boxes. 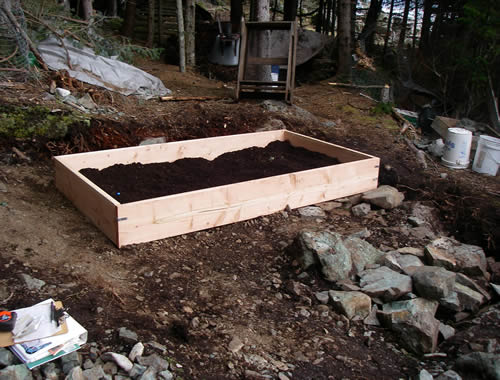 A newly built and filled raised bed, ready for planting.

Our challenges include winds, normally cool weather and limited light. We have learned to create windscreens with Lexan, keep row covers when needed for warmth, and hope for direct sunlight in the morning hours. Thank goodness for our very long days during the growing season!

We take advantage of seaweed that washes up on the beach, and compost for fertility. We have learned a lot about crop rotation. Our yields increase each year.

In 2011, we built an archaeological style sifter, which has really helped process compost humus and garden soil. You can order plans for building your own here.