Wildlife Seen On and Around
The Zeiger Family Homestead
Haines, Alaska

Wildlife constantly surrounds us on the homestead. Unfortunately, It's very difficult to photograph the animals we see! They appear so quickly and unexpectedly that it's hard to grab the camera in time to capture them before they leave. Besides, let's face it: if you suddenly see a wild animal at close range, would you rather watch it, and soak it all in, or see it through a viewfinder, hoping the photos will be good enough to preserve it for later?

Further, an animal in the water usually just shows up as a dark spot in a photograph (as you'll see below). We're developing our photography skills and strategies, and hope to add quality photos to this page as we can.

We see a lot of humpback whales off our beach. It seems to be a favorite feeding area. 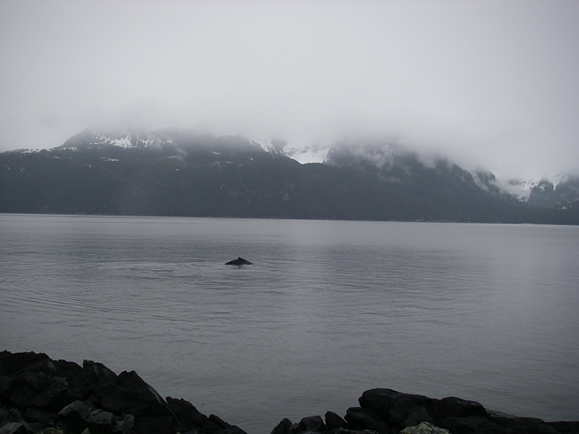 In May 2008 we got lucky! A whale started breaching (jumping clear out of the water) right in front of the cabin. Michelle's parents were visiting from Washington State. Michelle's dad took these photos. Unfortunately, none of us got any of the big jumps. 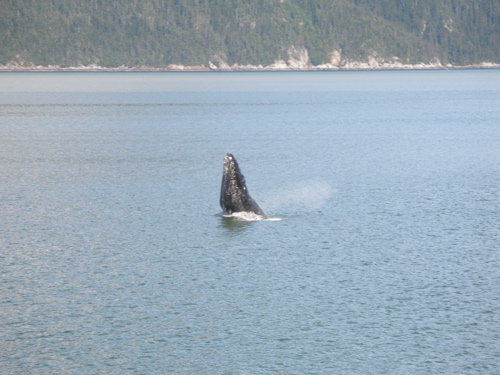 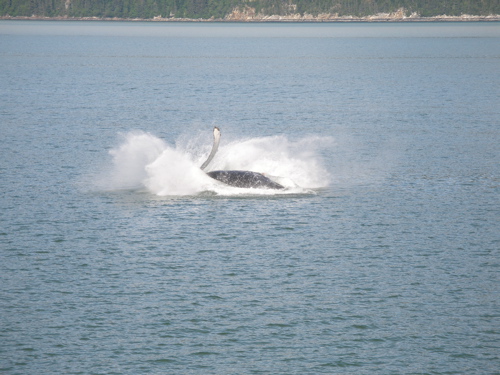 This whale came through our bight close to the beach, as many often do. 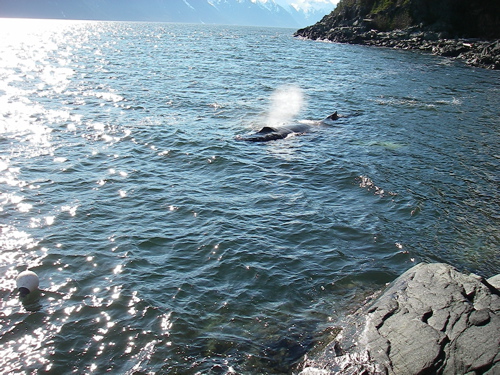 We see killer whales (orcas) now and then. 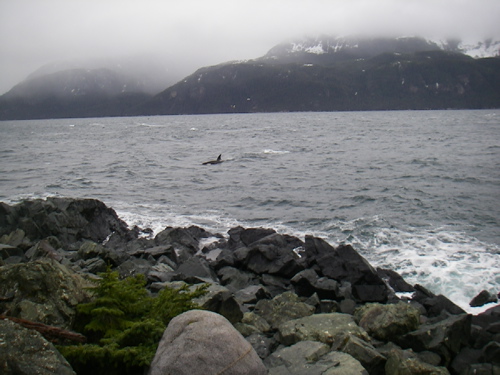 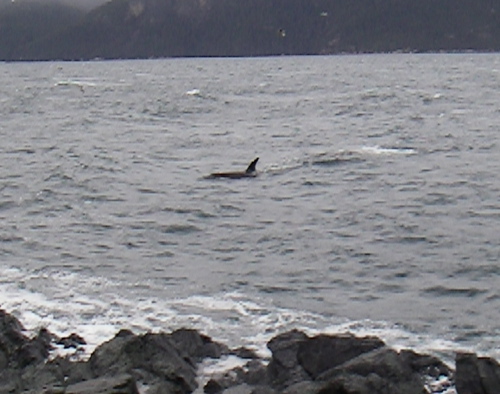 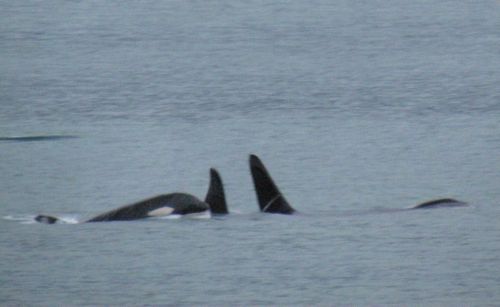 Sea lions swim by often, since their haul out is right across Lynn Canal from us. One day they were swimming with a whale, following right behind it and around it. Two of them came to watch us watch them. 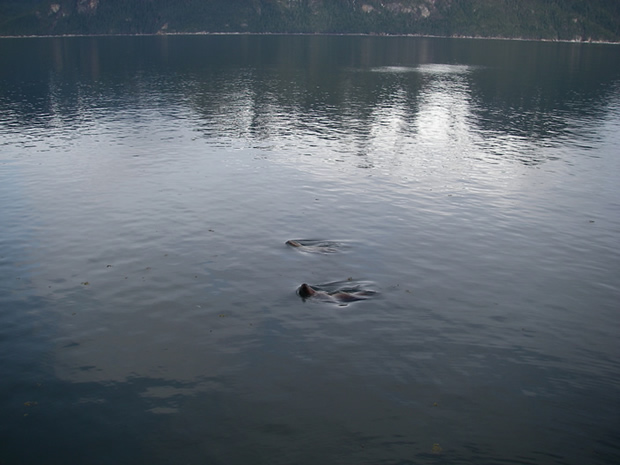 Here you can see sea lions in the foreground (forewater?) and the whale's tail as it dives in the water behind them. 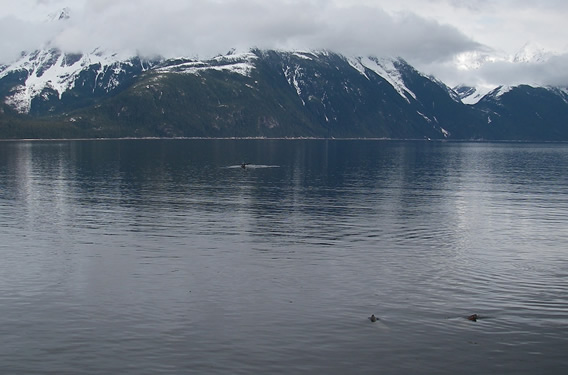 These sea lions were part of a mob of about ten or twenty that hunted herring right off of our beach one year. As they rushed the shoal, it boiled out of the water, and a bunch of herring flopped up on the beach. At that point we dropped our cameras and grabbed buckets! 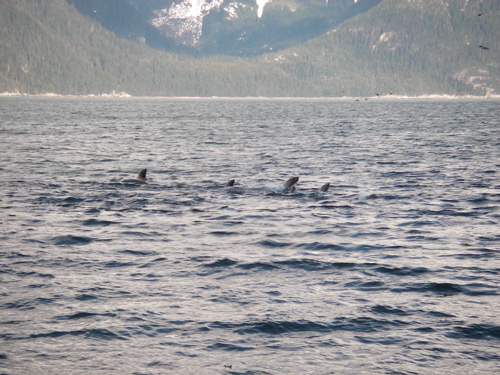 In spring, vast numbers of surf scoters form huge rafts. They're fun to watch, as they tend to dive and surface more or less at the same. Watching a flock like this, they'll suddenly start to disappear, then when they come back, they seem to well out from one source, almost like watching popcorn pop. 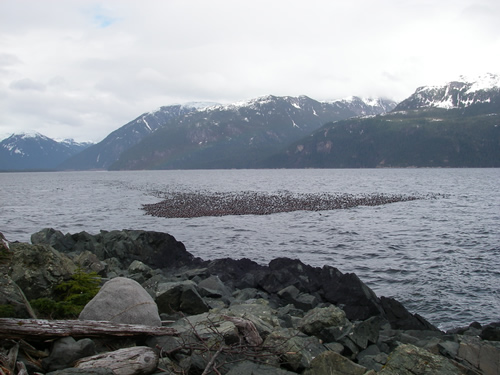 September 2006 Aly caught her first fish off the rocks out front, a kelp greenling. 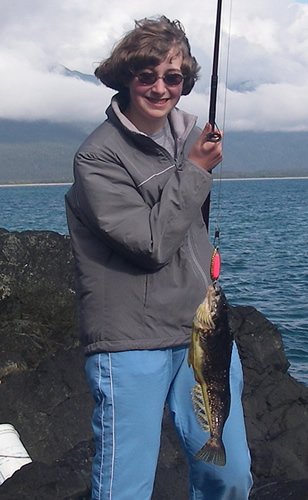 Aly and Mark saw this sooty grouse, called a "hooter," on Christmas Eve 2005.

Mark bagged a hooter above the front yard a few years later. 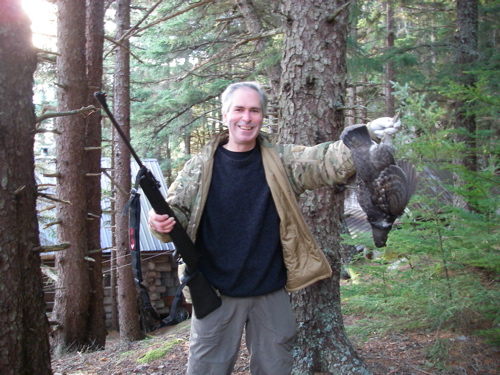 This red squirrel has just dug into his cache behind the house for a snack. 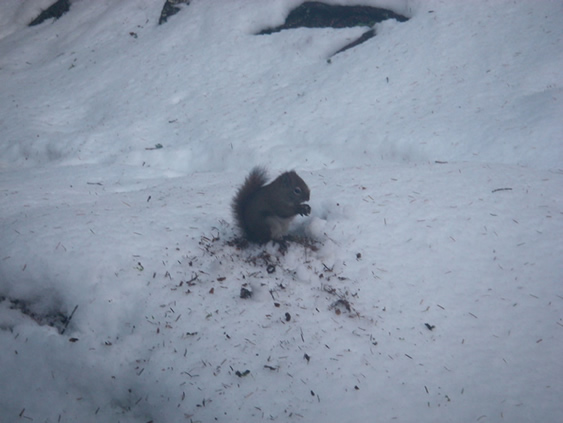 There are a lot of moose in our area. They visit our compound occasionally. They bed down in the garden and decimate our cherry trees. For size reference, the bottom of the wind chime is about eight feet off the ground. 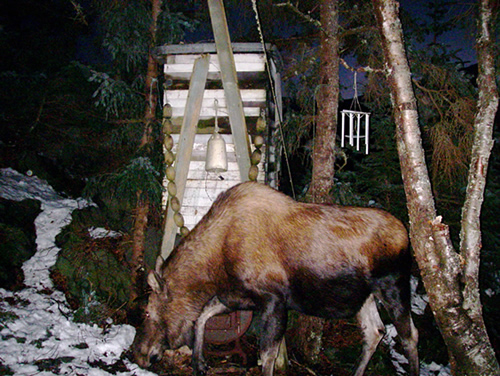 We almost chased this one and her yearling calf out of the compound, but she turned around and charged us. 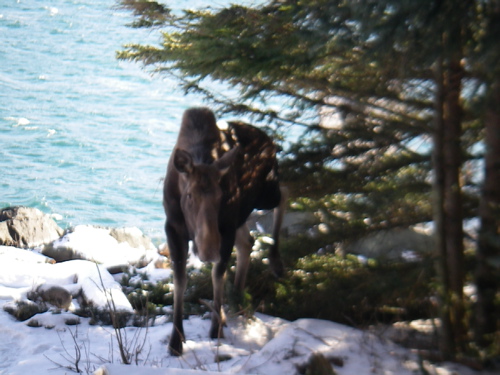 Aly used to set a wildlife camera at promising locations to try to capture wildlife. In June 2009 she caught this young bull moose in the muskeg swamp south of our property. 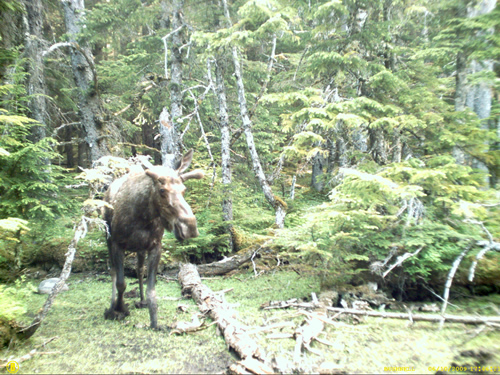 We've had mink living in the yard. We only got a good photo in late March 2007, when the female curled up like a kitten in a plastic burlap sack underneath the front corner of the cabin. She sat there patiently while we took flash photos of her. We worried she might be sick, but she hopped up to go fishing for a while, then came back. 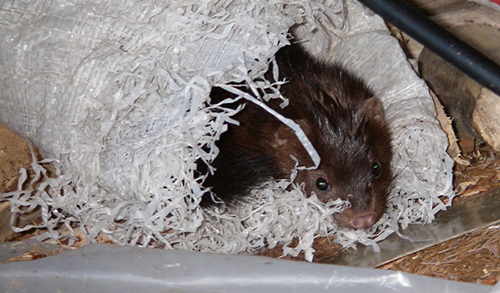 Later in the spring, this mink and her mate settled into a den under the rhubarb patch, and we assumed they were raising a family. Sometimes when we saw the female, she seemed to be carrying little minks by the scruff of the neck. We saw them in the rhubarb, but also going in and out under the house. That July, we confirmed that they were raising young when we discovered two baby minks wrestling under the cabin!

Here's some film of them in action

We see lots of loons in Lynn Canal. Here's a pair in Mud Bay. 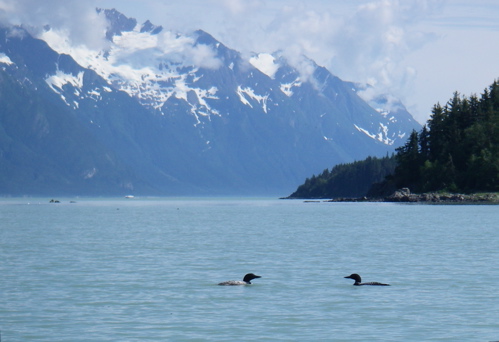 In July 2008 a bear visited our property long enough to stroll through the garden, dig through a compost pile, and poop on the trail to the boat house. We see tracks and sign every now and then, but we have never actually seen a bear on the property.
That's Aly's hand in the photo for size comparison. 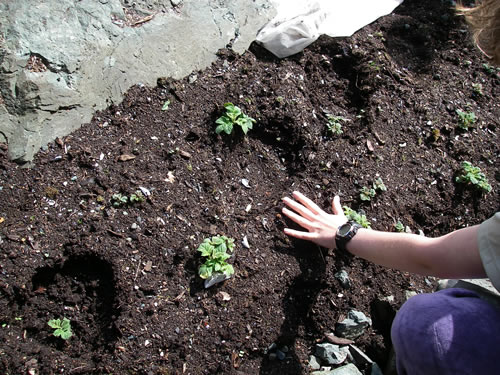 Every once in a while, coyotes visit the homestead. 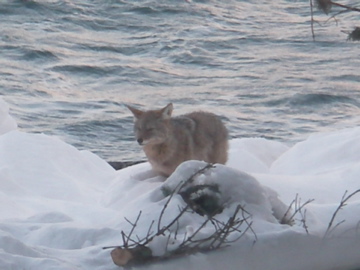 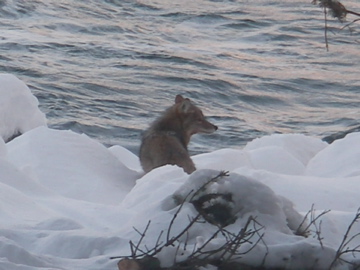 We have boreal toads living in the garden. 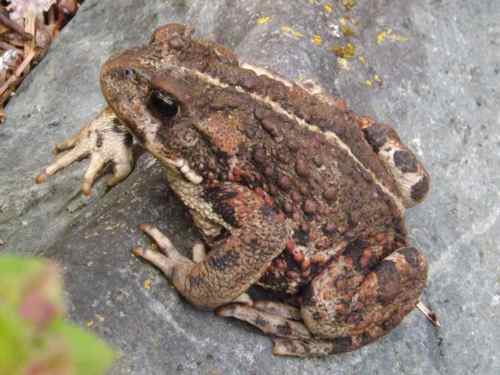 Check back periodically for new photos of wildlife, and search our blog for "local wildlife" for stories of animal encounters.